A group of us Spanish-speakers in my workplace have begun a monthly chat and social time, usually focused on a particular article, book, or film. We discuss topics related to Latin America and Spain, and reflect on our experiences as Spanish speakers here in California.

Our first meeting focused on the idea of “pegarle de zurda,” which roughly translates to “kick it from the left.” It means to flip something on it’s head, to look at things through a different lens, or to question the status quo. This phrase is the theme of the song “De zurda” by Gustavo Santaolalla, Gustavo Cordera, Julieta Venegas and Chocquibtown. It came out during World Cup and, apart from the clear soccer theme, was an encouragement to look at things from a new – in this case, Latin American – perspective. It was also a reaction to Pitbull and JLo’s World Cup theme song, which is in English and had a very North American perspective.

One thing I learned about through our conversation was of the Uruguayan artist Joaquín Torres García and his lovely, simple image entitled “América invertida” – “Inverted America.” 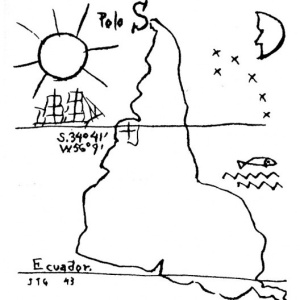 I love it so much that I’m getting a shirt made at Cafe Press! For anyone who has spent time “south” of the equator, you know that south becomes north and north becomes south….I’ll give you a minute to meditate on that one.

Anyway, I love this image and what it represents. When I was in South Amerrica, my world felt upside down – the stars are not where they “should” be. The weather is not what it “should” be for that time of year. The world – my world – was al revés, and everyone should know what it feels like to realize that what is foreign for you is completely normal to others.